Just five days prior to President Obama’s August 14 visit, Tea Party patriots gathered at the Museum of the Rockies to greet Senator Max Baucus.  Baucus, who acted like John the Baptist clearing the way for the arrival of the Chosen One, was in Bozeman to promote the Make Health Happen Montana conference.  The President chose to come to Bozeman because he realizes the importance of Montana, in part due to Baucus’ position as Chairman of the powerful Senate Finance Committee and wanted to pressure the Senator into backing his more aggressive healthcare reform agenda.

While Baucus showed courage in getting out of his car and addressing Tea Party patriots for an impromptu question and answer session, his comments to the media the next day diminished our respect for him.  In an interview with the Daily Inter Lake, Baucus said “he tried to talk with people protesting outside the conference, but said they would not let him speak” which is a fabrication. He said that one demonstrator “was bused in from Texas” implying that others were also bussed in is also a lie.  We don’t need to bus people in because our volunteers, who in overwhelming numbers live in Gallatin County and vicinity, were willing to come out in full force on a Sunday night to stage this protest. Baucus went further in insulting us calling us “the closest thing to a mob that I’ve ever experienced in my life.”  I guess he’s never been to a Cat-Griz game before. 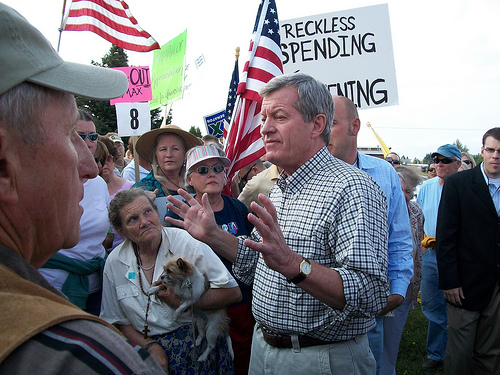 After speaking at a preventive-care conference here last week, he was swarmed by protesters. Or, in Mr. Baucus’s words, “agitators, whose sole goal was to intimidate, disrupt and not let any meaningful conversation go on.” There were a couple of people in the crowd “with YouTubes,” Mr. Baucus added (meaning cameras), and he posited that the agitators were paid and probably from out of state. (“I could just sense it,” he said.)

Insulting Tea Party patriots and offering patent lies is the new political speak and modus operandi of the White House. It is a shameful attempt to denigrate us, dismiss our concerns, and project blame.  Ken Champion, chairman of the Bozeman Tea Party, added “Montanans finally got a chance to discuss these important issues with their senior Senator and it was just a ruse.  He threw mud at people who opposed him.  His comments were disgraceful.” Bob Adney, a Tea Party organizer demanded an apology. “The Senator should be ashamed for his lies regarding our group and should apologize,” said Adney.  Montanans have every right to speak out against nationalization of the health system and should be not attacked by Baucus just because they oppose his idea of reform.”

Baucus’ comments are unfortunate because we had some very credible people at the rally including Dr. JD Clark, a local podiatrist who asked Baucus a pressing question about government micromanagement of his practice; Peter O’Reilly, M.D., a retired anesthesiologist; and others spoke during the open mike session.

Baucus’ comments only serve to add fuel to the fire of Tea Party and Town Hall protesters. The impromptu and brief Q&A session in the museum driveway is not a substitute for real dialogue with Montana voters. Neither was his teleconference Town Hall meeting sponsored by AARP.  While Montanans continue to flood the Senator with emails and calls opposing universal healthcare, Baucus has declared that health care reform with or without Republican support will move forward.  I’m sure he also means with or without the support of most Montanans as well.